The Russians draw the side numbers of their warships

The military personnel of the aggressor country paint over the names and tail numbers on their warships.

According to the press service of the General Staff, this action is seen as preparation for the upcoming provocations against civilian ships, followed by the accusation of Ukrainian warships.

“The Russian navy continues to cherish the lowest traditions of piracy,” the General Staff noted.

Russian troops hide "gumconvoys" in the port of Berdyansk 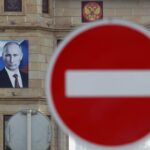 The Russians draw the side numbers of their warships