In 2021, Grain-Transshipment has transported 382,000 tons of cargoes on inland waterways of Ukraine.

The river terminal of this company – the Pearl of the Dnipro in the city of Dnipro in 2021 managed to reach a transshipment volume of 107 thousand tons.

The Cabinet will reduce the staff of the Maritime Administration 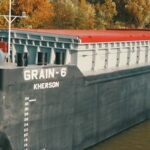